In 1968, Dominga “Edith” Zanitti and Pedro Arias purchased one acre of land in the outskirts of Buenos Aires, the autonomous capital of Argentina. “La Pequeña”, or “The Little One” as they named the land, was envisioned as a small weekend escape for the couple and their four children; Telma, Walter, Maria Alejandra, and Veronica. Over the years, La Pequeña has grown to be a key part of the family, hosting several family gatherings, birthdays, and major holiday celebrations with up to 40 people on a yearly basis. La Pequeña served as a space to celebrate and enjoy quality family time, even after the passing of Pedro in 1999.

Edith, now an 85-year-old grandmother of nine, has continuously done improvements to La Pequeña, including the addition of a pergola, a swimming pool, and renovations to the house. Edith’s most recent project was made possible due to the Covid-19 pandemic. For years, Edith had dreamed of having her own herb and vegetable garden on the land; she already had numerous fruit trees on the property. When lockdown began in March of 2020, the family decided it was best to have her self-isolate at La Pequeña, to be away from her main home in the much denser Buenos Aires and to have access to the outdoors. This gave her the opportunity to work on several improvement projects that would otherwise have been difficult to coordinate and monitor.

With the help of her recently hired contractor and handyman, Mario Julian Silvero, work on the garden began. One might wonder why a garden is worth mention in a zero waste blog, but what makes Edith’s garden unique is that it was created almost exclusively with previously used and stored, or discarded materials that would have otherwise been sent to a landfill or sat unused on the property.

The garden is composed of a gate, chainlink fence, wooden fence posts, a faucet, and wooden raised garden beds. The gate was previously unused, as it was taken down from a different location of the property when a hedge separating two areas of the property was removed. It’s also noteworthy that the when the gate was originally purchased 20 years ago, it was bought from a secondhand used goods store. The gate was treated and repainted to make it look newer after years of unuse and storage. The chainlink fence was found at the curb of a neighboring property, waiting to be collected by garbage trucks. Mario was able to retrieve the fence and utilize a portion of it in this project.

The wood used for the fence posts and the raised garden beds had been in storage for years. An old wooden gate was taken apart and used to help the structure of the fence. The faucet was reused from a sink that was underutilized. Even the red and green strips used to scare away birds were made from unused Christmas decorations.

The garden is already bearing young herbs and vegetables, including bell peppers, lettuce, radishes, beetroot, squash, arugula, tomatoes, mint, rosemary, oregano, and more. Edith is thrilled for future family gatherings and holiday celebrations to feature dishes made with the food she has grown on her property; land which has been through thick and thing with the Arias Zanitti family. This garden is a prime example of ways which anyone – regardless of age, class, gender, or location – can go the extra mile to reduce waste, reuse materials, and reinvigorate underutilized space and objects. 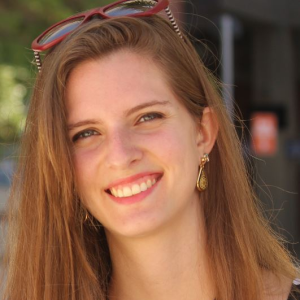 Mariana Arias Sanz
Mariana is a graduate from the University of Florida with a bachelor’s in Sustainability and a master’s in Urban and Regional Planning. She is a planner by profession, having worked in both private and public sectors. Her international background has contributed to her multicultural outlook on sustainability matters, including solid waste management, sustainable urban redevelopment, densification of cities, smart cities, and encouraging active transportation through planning. Her passion for sustainability and the environment began at an early age, motivating her to pursue the creation of a holistic relationship between people and where they live.